This is delicate, light and atraumatic instrument. Its blades are c shaped with fine teeth on its inner surface. It has a rachet.

It’s blades are sharp in such a way that when applied a part of the circumference of the vessel can be caught and sutured, while allowing the blood to flow onstally.

It has 2 sharp teeth which do not approximate but cross each other. The blades are distally bent at an angle which allows them to flush with the skin surface. It has a rachet.

1. To hold sterile towels in position.
2. To hold the tongue.
3. To hold the ribs while elevating them in a firil chest.

It has curved blades at the distal end which cross over in a figure of “8” pattern and ends have tapering points.

To hold sterile towel in position.

It has two pairs of teeth on either side of the blade. It has long flat and slightly curved needles. It has a rachet.

1. For fixing of skin towels to each edge of the incision so that wound may not be contaminated from the adjacent skin.
2. For fixing suction.

It has a blunt end with an eye at its tip so that a ligature can be passed through it.

For isolating and passing a ligature around the blood vessels.

It has a small suction tip. The shaft is angulated and is available in different sizes 11 to 15 french. It has a side vent which provides control of the intensity of the suction and allows the end to break free of tissues.

For suction in small spaces.

It is a bigger suction with a broad handle. Its tip has a large central hole with multiple small holes at its periphery. The tip is covered with rubber or sponge to protect the tissues.

The strong suction effect at the tip may suck the omentum or intestines, hence direct suction would not be applied.

It is used as general suction during any operation.

It is a short instrument. The ends of the blades have teeth which are straight and curved outwards. There is a rachet which when approximated opposite the blade.

It is used during surgery on

Its semi-circular in shape with two pairs of blades at one end and a handle at other. The two blades have an arrangement similar to a towel clip with a catch.

It is used during surgery on thyroid and parathyroid glands.

A SIMPLE LEARNING FOR NURSES 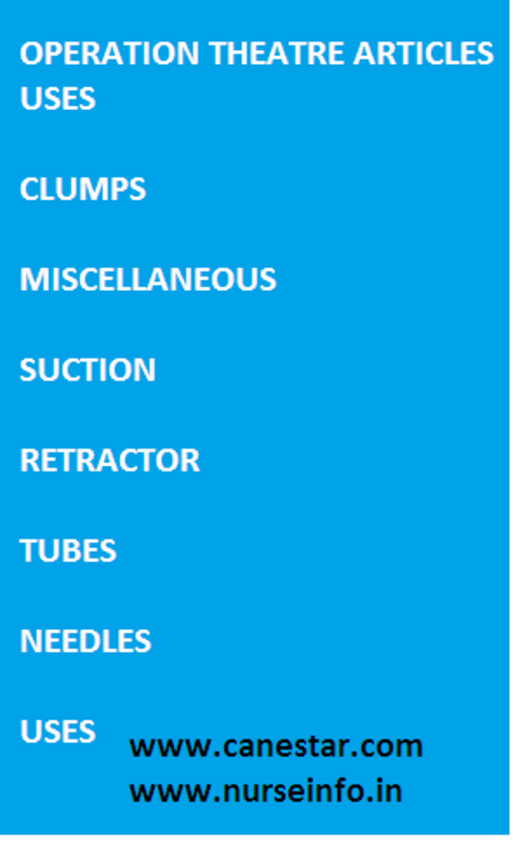 It is a self retaining three sided triangular metal frame, to each side of which is fixed a swivel jointed flat blade. The third blade is long and has a ‘s’ shaped curved which serves to retract the urinary bladder to loose the prostate gland.

1. It is used during retropubic prostatectomy.
2. Used in surgery on urinary bladder (without 3rd blade).

It is one of the largest catheter which is made of India rubber with a length of 18 inches. The tip is open with side holes. The distal end is kept under water so that the gas bubbles can be seen coming out indicating the amount of gas passed.

1. In severe flatulence.
2. Post operative tympanism.
3. In cases of sigmoid volvulus for derotation and decompression.

It is a tube which is introduction into the trachea via nasal or oral route. It is available in different sizes and the tube selected for intubation depends on the age of patient and diameter of the trachea. It is of two types.

1. For endotracheal intubation.
2. For administering anesthesia
3. During resuscitation.

It is a T-shaped tube made of latex. It is available in different sizes. The horizontal limb is gultered and is introduced into the common bile duct while the vertical limb is brought out to the anterior abdominal wall. It is also available in pre-sterilized pack.

1. To drain the common bile duct after exploration
2. To do a T-Tube cholangiogram after surgery.

It is a long and stout instrument. The blades have tenuculum pointed end for a firm grip. These are course transverse serrations on the inner aspects of the blades. It has a rachet.

It is a non-crushing clamp. The blades are long and thin.

1. It prevents leakage of bowel contents.
2. Arrest bleeding, does not crush the bowel.