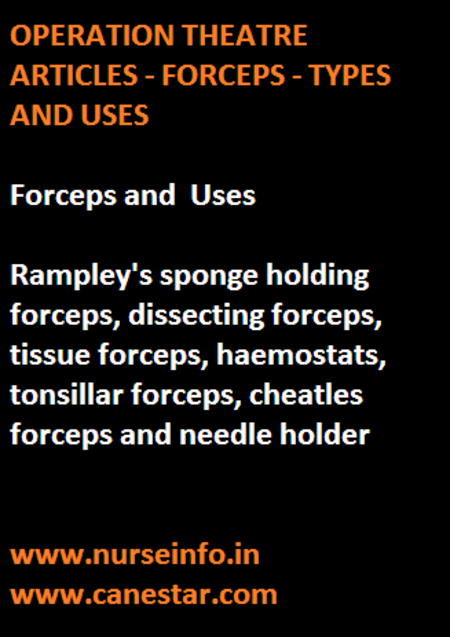 It is a long forceps with gently curving blades. It is one ring is incompletely as to facilitate the passage of suture material while tying blood vessels in a deeper plane.

It is used during tonsillectomy and pelvic surgery.

It can be used to select and pick up sterilized articles like drapes instruments and vessels or even bottles from sterilized drumps or autoclave.
As, it is a heavy, long and good with serrations solutions, sterile articles can be safely transferred from one tray to another.

1. To hold the needle for suturing.
2. Straight type is used for holding needles while suturing at surface, curved type is used to work at depth or inside the cavity.

It is a medium size straight forceps with coarse transverse serrations. It has a broad and blunt tip. The blade is diamond shape.

1. For crushing the base of the appendix.
2. To hold catheter around tubular structure e.g. during ureterolifthotomy.

It has a curved and blunt tip with longitudinal serrations on its blades. It has a long handle with a rachet so as to facilitate working in the depth.

It has a spoon shaped blades with spike on its inner surface to give a proper grip on the stone.

It is used to remove bladder calculi during suprapubic cystolithotomy operations.

It is differentiated from other artery forceps by the plane of its blade.

To catch bleeders during scalp surgery.

It is a 9 and half long instrument with thin shafts. This blades are fenestrated near its distal end and the inner surface of the blades have transverse serrations. It has a rachet.

1. To hold gauze pieces while preparing the operating site.
2. To hold structures like gall bladder, ovary etc.
3. To pack the cavity and compress the bleeder in depth.

It is similar to sponge holding forceps but its fenestras are round and without serrations. It is an atraumatic forceps but has a racket.

It is used to hold structures like lymph nodes, cysts etc during the dissection.

It is a traumatic instrument. The blade is curved, thick and fenestrated with a single tooth at its tip.

It is an traumatic forceps with fenestration and its tip has fine teeth. There is a gap between the blades which makes the instrument light.

It has long, thin and gently curved shafts to facilitate its introduction into the dults. It has a rectangular fenestrated blades without serration on the inner aspect. There is no rachet so that the stone does not get crushed.

For removing stones from the common bile ducts and hepatic ducts.

It is available in various sizes and curvatures. The fenestrated blades have serrations to hold the stone. It has a long shaft with raws set at an angle for easy introduction in the calyces. It has no rachet.

For removing stones during pyelolithotomy.

It is similar to young’s gland holding forceps, except that the pile holding foreceps has a groove on the inner aspect of each ring shaped blade. It has a rachet.

For holding the pile mass during haemorrhoidectomy.

It has jaws at its tip and endoses a triangular apertove. The inner surface is finely grooved to obtain a firmer grip without traumatizing the lung. The blades are gently curved.

To hold the lung during lobectomy, Pneumonectomy etc.

It is also called as cord holding forceps. It is a ring shaped forceps with a rachet. The ring is formed when the handles are approximated.

For holding and retracting the cord structures during hernia operation.

It is right angled instrument. It has a rectangular, cutting, mobile upper jaw at it tip. The lower jaw is cupped to accommodate the punched fissues. The jaws can be opened and closed by approxiamately the handles.

It is curved forceps with fenestrated blades and serrations on its inner aspect. It has no rachet. The curve of the blade facilitates introduction by endotracheal tube without obstructing the vision.

1. To guide endotracheal and ryles tube.

2. To pack the oropharynx.

3. To remove foreign body from the oropharynx.

1. It is also known as sponge holder.
2. It is used for holding sponge and cleaning the site of the operations or for deep mopping to clean or swab blood in the cavity.
3. It is also used for packing body cavities such as vagina.
4. It is used for separating tissues also, it is again used to catch soft organs like ovary, cervix etc.

It is used to plug cavities such as nose, ear or abscess cavity.

1. Use as clamp for the pedicles of internal organs like kidney, spleen, ligaments of uterus.
2. To hold the tip of appendix and crush the base of the appendix.
3. Used for blunt dissection by bolding peanut or swabs.
4. To introduce small plug or drain in a small cavity.
5. To substitute in the place of a needle bolder