1. To drain fluid or gas that accumulates above the mechanical obstruction in the stomach or intestines.

2. To prevent or treat post-operative vomiting and distension caused by the lessening of peristalsis (paralytic ileus) following anaesthesia and manipulation of viscera during surgery, or by obstruction in the gut (intestinal obstruction).

3. To deflate the stomach or intestine in case of dilatation and bring them back to their normal functioning.

4. To remove the contents of the stomach and intestines to prepare for general anaesthesia and surgery.

5. To aid in the healing of the wound in case of surgery of stomach and intestine.

6. To prevent or check haemorrhage in case of oesophageal varices.

The short tubes, commonly called as naso-gastric tubes (e.g. Levine) are used to achieve the decompression of the stomach and duodenum.

The long tubes (6 to 10 feet long) are used to decompress the small intestine and bowels. The common among them are:

A – Abbot Miller Tube: it is a double lumen tube; one lumen is used to inflate the balloon at the end of the tube and the other is used for the aspiration of the contents.

C – Canter Tube: this is a 10 feet long tube. It has a mercury filled bag at the extreme end.

This is used to control bleeding from the oesophageal or gastric varies in clients with portal hypertension. It is a naso-gastric tube with separate oesophageal and gastric balloons and a separate lumen for gastric aspiration.

Naso-gastric tubes are usually inserted through the nostrils. (for method of insertion, the same method used in Tube Feeding). In case of intestinal tubes the addition of balloon on the tip of the tube makes its insertion through the nose more difficult for the client. Ordinarily, the tube can be inserted up to the stomach. Its passage along the remainder of the G.I. tract is dependent upon gravity and peristalsis. The weight of the mercury in the balloon helps to propel the tube through the intestines. Position of the patient and his activity is also aid in its passage. These are rarely used now-a-days. 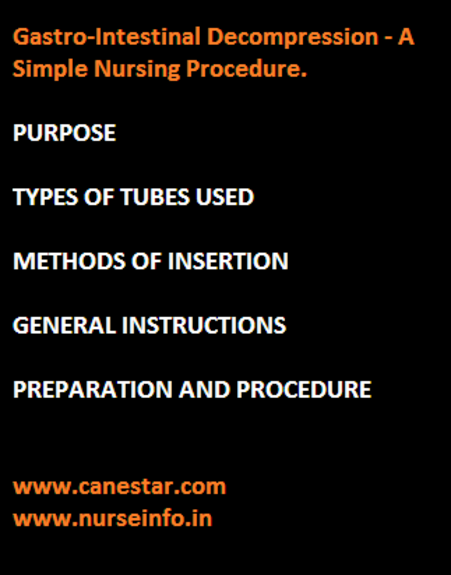 2. The tubing should be lubricated fairly to facilitate its passage to prevent friction and trauma.

4. The period for which the tube remains in the stomach or intestine depend upon:

This may be left in, until normal peristalsis returns or until the obstruction is relieved.

5. The signs of return of peristalsis, such as the passing of gas from rectum or a spontaneous bowel movement should be reported to the surgeon as these usually indicate that the tube is no longer needed.

6. Handling of the intestinal tube should be done by the surgeon especially when there is a suture line that can be injured during intubation.

7. The tube should be secured in such a way that it does not cause any irritation in the nostrils.

8. Frequent mouth washes and application of an emollient to the lips are necessary to prevent drying of the mucus membranes.

9. Adequate fluid intake by means of I.V. route should be ensured to prevent dehydration. Intake and output chart is maintained.

10. The tubing that connects the naso-gastric tubes to the drainage bottle should be neither too long nor too short. It should give enough freedom to the client for movement in bed and at the same time, it should not form any kinks.

11. The gastro-intestinal tubes are irrigated with a small amount of normal saline frequently to keep the tube patent by preventing the plugging of the tube with mucus and blood clots. After the fluid is instilled, it should be aspirated immediately. The fluid is introduced and aspirated should be recorded accurately. If the irrigating fluid is not measured accurately, the amount of the total gastric drainage will be inaccurate.

12. The intestinal tubes should not be secured to the face until it has reached the desired point in the intestine, since taping or the tube will prevent from advancing with peristalsis.

14. The intestinal tubes are always removed gradually. While withdrawing it, some resistance may be felt because of the pull against peristalsis. When the tip of the tube reaches the posterior pharynx, it may be brought out through the mouth so that balloon and the mercury can be removed. The tube is then pulled through the nose. The client is given a mouth care immediately. To relieve the sore throat caused by the tube, gargles and lozenges are given to the client for several days.