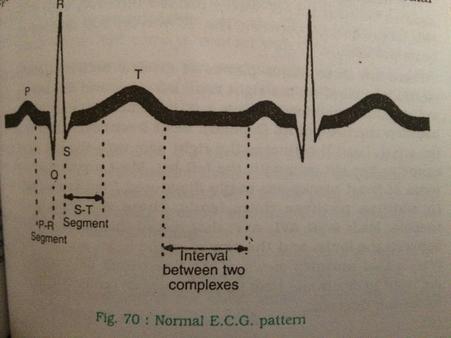 ADMINISTRATION OF MEDICATIONS - TYPES AND CLASSIFICATION 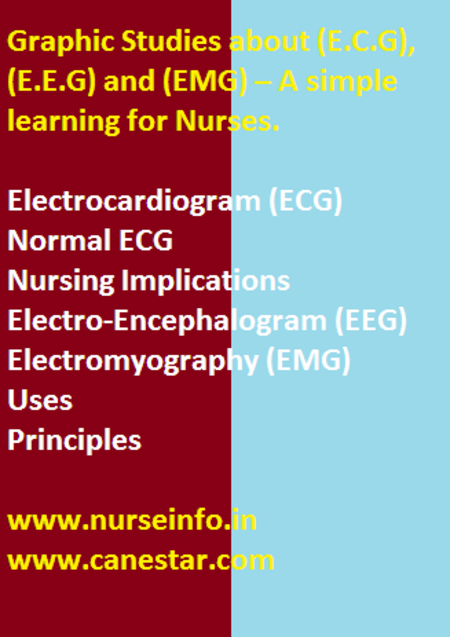 We can calculate the heart rate from the ECG. It is done by determining the distance between the ‘R’ waves. It there are:

There are three major planes of electric activity detected with electrodes placed on the right arm, left arm, and the left leg. These are standard limb leads (leads I, II, III) that measure the difference between the two points (bipolar). Lead I connects the two arms at the wrist. Lead II connects the right arm with the left leg. Most arrhythmias and most types of heart blocks are easily diagnosed from these leads alone. In addition to these three leads, there are three augmented unipolar leads (AVR, AVL, AVF) that record the difference in potential between the limbs and the centre of the heart and six chest leads (V1 to V6) that provides views of the heart from different angles and are used to determine how far anteriorly or posteriorly the electrical forces are directed.

2. In coronary care units, the cardiac rhythm is monitored continuously by a cardiac monitor in order to detect ECG changes that may indicate myocardial ischaemia. These nurses working in these units should be familiar with the ECG records in order to detect the development of abnormalities. Any abnormal changes should be recorded and reported immediately.

3. The cardiogram tracings may be affected by a variety of factors. Therefore, the nurses should be aware of these facts:

a. There must be good contact between the client’s skin and the electrodes. This can be assured by applying electrode jelly to the skin where the electrode is attached.

b. The client’s position is also important and can affect the tracings. He should lie flat and as relaxed as possible, because any movements or muscular twitchings recorded by the machine may alter the tracings.

c. The bystanders should be kept away from the client to prevent them touching the client during ECG procedure.

d. The client should wear no ornaments on the body during ECG. If it is unavoidable, care should be taken that the leads should not come in contact with the ornaments.

e. Before each cardiogram, the machine should be checked for proper standardization. When the standardization button is pressed, there should be a deflection of 10 mm on the graph. This means a spike made will be of two large squares.

f. It is important that the machine should be properly grounded to prevent interference with the recording. The machine may have a ground wire in the plug or there may be an accompanying ground wire that can be attached to the appropriate grounding.

V5 – in the same horizontal position as V4 in the anterior axillary line, on the left side.

V6 – in the same horizontal position as V4 in the axillary line, on the left side.

No other electric equipment should work in the monitoring area

Transport the client on trolley, to the ECG department.

The electro-encephalogram may be compared with electrocardiogram, in that the electrodes are placed over the skull in many areas and the electric activity of the various segments of the brain is recorded. EEG is painless and a safe technique for evaluating the brain pathology such as brain tumours, brain abscess and epilepsy. The lesions in the substance of the brain may cause abnormalities on EEG tracings. EEG serves best to identify seizure disorders by type and area of origin within the brain. Within the EEG, this may not be identified. So several seizure activating measures are used during EEG such as:

a. Breathing deeply for several minutes to produce alkalosis

b. Producing a sleep deprivation syndrome

c. Producing a sleep either naturally or by drugs

The purpose of the above procedures is not to produce a convulsion but to induce diagnostically important abnormalities.

1. The preparation of the client for EEG is extremely important because it can directly affect the accuracy of the test results. The client should be explained about the procedure and reassured that EEG is in no way painful and dangerous. He should be told that it is not a form of shock treatment or a way of hypnotizing the client.

2. The explanation should be satisfactory to the client to win his confidence and co-operation. To record EEG, a relaxed and co-operative client is necessary.

3. Withhold all medications, especially the nerve stimulants and depressants for 3 days prior to the test. This should include tranquillizers, anticonvulsants, analgesics, hypnotics and sedatives.

4. The client should not take coffee, tea, alcohol, alcoholic beverages etc. on the day of the test, since these are stimulants to the central nervous system.

5. The client should not be disturbed mentally before the test. Mental excitement and depression can alter the EEG tracings.

6. The client should not sleep prior to the test. This may induce sleep in the client during the procedure. Sometimes a sleep EEG is indicated to detect temporal lobe epilepsy. In such cases, a sedation is administered 45 minutes prior to the EEG and the procedure is performed when the client is sleeping.

7. The hair should be clean thoroughly with a shampoo. No oil or metal appliances should remain on the hair. No need to cut the hair.

An electromyography is the recording of the electrical activity associated with enervation of skeletal muscles. Electrical currents are produced by skeletal muscles called muscle action potentials. In this, small needle electrodes are introduced into the muscles to record specific motor units, because recording from the skin is not sufficient.

The electrical potentials of each muscles are amplified; transmitted to a cathode – ray. Oscilloscope is displayed on a screen. The record may be made audible by playing on a loud speaker and simultaneously analysis can be done.

3. It helps to identify specific primary muscle diseases and may indicate a defect in transmission at the neuromuscular junction, such as myasthenia gravis.

4. Helps to differentiate diseases of the anterior horn cells from those primarily of peripheral nerves.

5. Helps to monitor peripheral nerve degeneration and regeneration before any clinical changes appear.

6. Can detect diseases of the muscle i.e., myopathic conditions.

There is no special client preparation. Explanation about the procedure is done. He should know that when the needle is inserted into the muscle, he may feel a sensation similar to that of an intra muscular injection. Avoid all stimulants, depressants or sedatives for 24 hours before the test. The client may experience a mild electrical shock during the procedure. The client lies flat and may be asked to move various muscles at specific time during the test.

An electrocardiogram is a graphic record of the electrical impulse that are generated by depolarization and repolarization of the myocardium. These impulses are conducted to the external surface of the body where they are detected by electrodes and measured by galvanometer.

The SA node (pacemaker of the heart) initiates each heartbeat by discharging an electrical impulse. As this electrical impulse spreads over the atria and ventricles, the atria contracts and is followed by ventricular contraction (depolarization). As the wave of contraction passes off, atria and ventricles relax (repolarization). This process normally takes place with each heartbeat (60 to 100 times per minute).
​

To understand an ECG record, note the following points. The electric activity of the cardiac cycle is characterized by five primary wave deflections. These are designated by the letters P, Q, R, S, T. ‘P’ wave represents the atrial contraction. It can be assumed that the impulse began in the SA node if ‘P’ waves are present and are of normal size and shape. ‘P-R’ interval is the period from the beginning of the P wave to the beginning of the ‘QRS’ complex. P-R interval represents the time it takes for the impulse to spread from the atria to the ventricle. If the P-R interval is prolonged, there is a delay in the conduction through the AV node.