By this method, the first stream of urine flushes out the organisms and mucus usually present at the meatus, so that accurate result can be obtained.

It is necessary to add preservatives to the urine to prevent decomposition and multiplication of bacteria. A variety of preservatives are available such as toluene, boric acid concentrated hydrochloric acid, formalin, chloroform etc.

Method of Collecting Urine Specimen from Unconscious Clients and Children

To collect urine from male babies or unconscious male clients, take a test tube, a barrel of a syringe or with rubber tubing and is attached to the penis. It is kept in place by adhesive tapes. The rubber tubing is connected to a bottle and the urine is collected in the bottle.

To collect the urine from the female clients, attach a wide mouthed container or a funnel with a rubber tubing to the vulva by means of a “T” binder. The rubber tubing is connected to a bottle and the urine is collected in the bottle.

Examination of the Urine

Appearance – the normal urine has an aromatic odour.

Milky white – chyluria due to filariasis

Sweetish or fruity odour is due to the presence of ketone bodies (acetone and diacetic acid) seen in diabetic clients.

Mucus – appear as a flocculent cloud.

Pus – settles at the bottom as a heavy cloud.

Uric acid – as grains of pepper.

When there is cystitis, the reaction of the urine may be alkaline. Precaution is to be taken to collect fresh urine specimen for reaction. On standing at room temperature, the urine becomes alkaline due to the formation of ammonia.

In disease the specific gravity may range from 1.001 to 1.060. it may be high in diabetes mellitus due to the presence of sugar and it may be low in renal diseases due to the inability of the kidneys to concentrate the urine.

Acetone is found in the urine due to incomplete metabolism of fat usually seen in diabetic clients. Bile may be seen in the urine when there is obstructive jaundice or haemolytic disease.

Normally the color of the stool is light to dark brown due to the presence of bile pigments.

Normal stool has a pungent smell. It is normally affected by the type of bacterial flora, by the food and medications ingested.

One to two per day and it is painless.

In adult, the stool is well formed and the consistency is semisolid.

Quantity depends upon the type and the amount of food taken. When the roughage in the diet is increased the amount is also increased. Quantity varies from four to five ounces per day.

The feaces  contain 30% water. The remaining portion consists of shed epithelium from the intestine, a considerable quantity of bacteria, a small quantity of nitrogenous matter mainly mucin, salts, calcium, phosphates, little iron and cellulose if present in the diet.

At birth the stool of infants is dark green and it is called “Meconium”. At the end of the first week, it becomes yellow and soft due to intake of milk diet.

Tarry black stools indicate bleeding in the upper gastrointestinal tract, the blood having been altered by the intestinal juices. The occult blood test will be positive. When the stool appears black, it is termed as “melaena”. Black stools may also result from the administration of iron or charcoal.

Clay colored stools indicate an obstruction to the flow of bile. The bile pigment that colors the stool (stercobilin) is absent. White stools may appear due to the presence of barium salts after barium  tests.

In melaena and dysentery, there will be foul smell. A strong smell results from meat diet.

In constipation, the stools are very hard. Flattened and ribbon like stools indicate some obstruction in the lumen of the bowel.

Fresh blood in large amounts is suggestive of bleeding piles, mixing the stool with menstrual blood, bleeding from the large colon (the digestive juices will not alter this blood), malignant growths, scurvy, leukaemia or purpura.

The commonest cause of blood and mucus found in the stool is due to dysentery which may be amoebic or bacillary.

Stool may contain worms or segments of worm e.g., round worm, threadworm, hookworm and tapeworm. On microscopic examination, the stool is found to contain various amoebae, E.coli, Vibrio Cholera, A.F.B., and salmonella group of organisms.

Waterproof disposable containers or wide-mouthed containers are provided with necessary instructions. The client passes stool in a clean bedpan. A small amount of stool is removed with a stick or spatula and is placed in the container. Discard the stick in the waste bin.

Normally no sputum is expectorated. The amount of sputum coughed up in 24 hours varies with the diseases.

The sputum may be classified into various types according to its consistency and appearance, e.g., serous, frothy, mucoid, purulent, seropurulent and haemorrhagic.

When sputum consists largely of mucus it may be colorless and translucent. Presence of pus may give rise to yellowish color. A blackish sputum contains a lot of carbon pigments as seen in excessive smoking. Presence of blood in the sputum is called as “Haemoptysis” and may appear as bright red or dark red. Bright red and frothy sputum indicates fresh bleeding from the lungs. Dark red shows that it was in the lungs for some time. Rusty color of the sputum is due to the altered haemoglobin as seen in pneumonia. Greenish color is seen in bronchiectasis. Brown color is seen in gangrenous condition of the lungs.

If sputum is examined microscopically, a few W.B.C. and epithelial cells may be seen. Eosinophils are formed in such conditions as asthma. R.B.C. is found only when there is haemoptysis. The main organisms that are looked for in a stained sputum are tubercle bacilli (AFB). Others are streptococci, pneumococci and diphtheria bacilli.

Water proof disposable sputum cups or wide-mouthed containers are used to collect sputum specimen. A large container is required if the physician desires to have the total sputum expectorated in 24 hours. If sterile specimens are desired, a wide-mouthed sterile glass bottle with a screw cap or a sterile petri dish can be used.

The client should be given the container on the previous evening and is instructed to raise the material from the lungs by coughing and not simply expectorating the saliva or discharges from the nose or throat. The sputum should be collected in the morning before brushing the teeth and taking the food. Mouth can be rinsed with plain water and not with any antiseptic mouth washes.

To make a blood smear the following articles are necessary:

Explain the procedure to the client. Make him seated. Clean the finger tip of the client with the spirit. Ask the client to turn the face away from you. Press the finger tip and give a gentle prick with the sterile needle. Allow one drop of blood to fall on each slide. Apply a cotton swab on the finger tip over the pin prick and instruct him to apply slight pressure over it. Quickly make a smear.

Lay the slide flat on the table with the blood drop on to your right side. Grasp the slide with your left hand. Take another slide in your right hand and lower it over the blood drop quickly. Let the blood spread on the edge of the second slide. Push the slide from right to left, thus spreading the blood into a thin film evenly on the slide. Make two or three such slides. Dry the slides in the room temperature and send it to laboratory.

Single urine specimen means the amount of urine voided at a time. Usually the morning specimens are collected. An amount of 100 to 120 ml of urine will be sufficient for the usual tests.

After cleaning the genital area, the client passes urine into clean urinal or a clean kidney tray or directly into the specimen bottle, taking care not to spill the urine on the outside of the container.

Ask the client to clean the genital area with soap and water, then rinse with water alone. In female clients, the labia are separated for cleaning and kept apart until the urine had been collected. In male clients, the foreskin should be retracted and the glans penis is cleaned before the collection of the urine.

How to Collect Specimen and  Testing Method – Nurses Guide

​ADMINISTRATION OF INJECTION - CLASSIFICATION AND TYPES 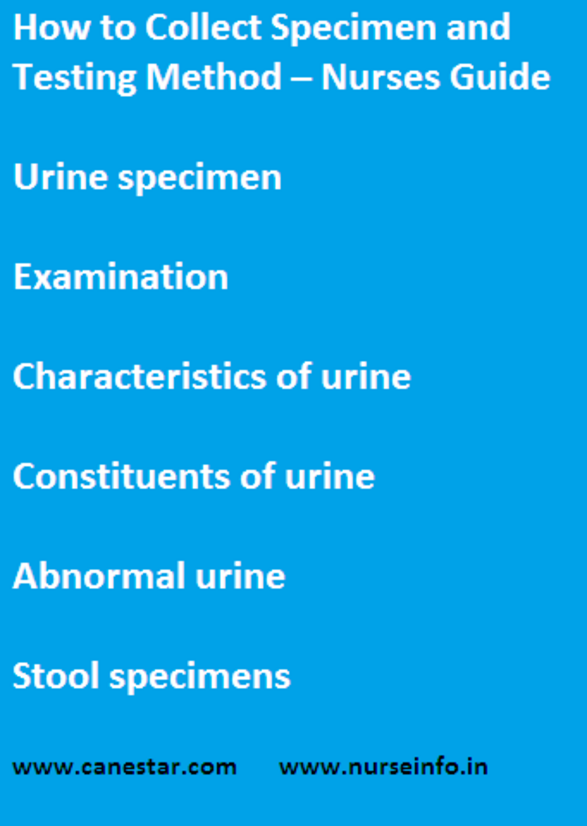