Theory: it is defined as a group of related concepts that explain existing phenomena and predict events. It is also defined as a construct that accounts for, or organizes some phenomenon.

A theory is a set of concepts, definitions and propositions that projects systematic view of phenomena by designing specific interrelationships among concepts for purpose of describing, explaining and predicting.

Concept: it is defined as labels given to ideas, objects or events, a summary of thoughts or a way to categorize thoughts or ideas. E.g. comfort, pain.

It is also defined as an idea, thought or notion conceived in the mind.

Paradigm: it is a conceptual diagram. It can be a large structure used to organize a theory.

Philosophy: it is a science comprising logics, ethics, aesthetics, metaphysics and epistiemeology. It is the investigation of causes and laws underlying reality and its inquiry into the nature of things based on logical reasoning rather than empirical methods.

Phenomenon: Phenomenon is any occurrence or fact that directly is perceptive by senses. It is based on the reality of what exists in the real world.

Definitions: Statements of the meaning of a word, phrase or term.

Research: it is the application of systematic methods to obtain reliable and valid knowledge about empirical reality.

Induction: it is a form of reasoning that moves from the specific to the general.

Deduction: it is a form of logical reasoning that progresses from general to specific.

Conceptual Framework or Model: it is defined as a set of concepts and the propositions that integrate them into a meaningful configuration.

Arts and Science of Humanistic Nursing:

It is started by Florence Nightingale, the founder of modern nursing, in her writings she explained nursing theories thus begun its development in theoretical thinking in Nursing.

She present her nursing theories as nursing notes, this became fundamental and continued to be the major framework for nurses.

In 1950’s, University of Columbia developed graduate programme to prepare nurses at the graduate level for administrative and faculty positions. The first theoretical conceptualization of nursing sciences came from these graduates. These graduates Peplau, Henderson, Hall and Abdellah given major contribution for Nursing theories. Columbian School focused primarily on the functional role of nurses.

During 1970’s to 1980’s, numerous nursing theories are revised and started doing research studies and experiments.

Virginia Henderson (1955) – the definition of nursing.

1981 – The phenomenon of caring importance, research questions and theoretical considerations.

1985 – Transcultural care, diversity and universality – A theory of nursing.

1989 – Watson’s philosophy and theory of human caring in nursing.

1997 – The theory of human caring – retrospective and prospective.

1999 – Postmodern nursing and beyond.

1998 – The human becoming school of thoughts.

Patricia Benner – From novice to expert excellence and power in clinical nursing practice.

Sister Callista Roy (1976) – An introduction to nursing – An adaptation model.

(1984) – An introduction to nursing an adaptation model- 2nd edition.

Imogene M. King (1971) – Towards a theory of nursing. General concepts of human behavior.

(1996) – The Neuman system model in research and practice.

Martha E. Rogers (1970) – An introduction to the theortical basis of nursing.

(1998) – Evolution of theory of health as expanding consciousness.

As a framework for practice by the nurses themselves.

It can be used in the nursing process developed by the individual theorist.

It can be used in the clinical practice methodology.

Through theoretical knowledge, the power of nurses increase because systemically developed methods are more likely to be successful.

Theory provides professional autonomy by guiding the practice, education and research functions of the profession.

Study of the theory helps to develop analytical skills, challenge thinking, and clarify values and assumptions.

It focused on the environment. She described about ventilation, warmth, light diet, cleanliness and noise and explain factors can prevent, suppress, or contribute to disease, accidents or death.

Henderson defines nursing in functional terms as “the unique function of the nurse is to assist the individual, sick or well in the performance of those activities contributing to health or its recovery that would perform unaided, if he had the necessary strength, will or knowledge.

Henderson identifies the 14 basic needs of a client as follows:

5. Maintains the body temperature within normal range by adjusting clothing and modifying the environment.

6. Keeps the body clean and well groomed and protects the integument.

7. Avoids dangers in the environment and avoids injuring others.

8. Communicates with others in expressing emotions, needs, fears and opinions.

9. Worships according to one’s faith.

10. Works in such a way that there is a sense of achievement.

11. Plays or participates in various forms of recreation.

12. Learns, discovers or satisfies the curiosity that leads to normal development and health and use’s the available health facilities.

Abdellah states that nursing is both an art and a science that moulds the attitude, intellectual competence and technical skills of the individual nurse into the desire and ability to help people whether ill or not, and cope with their health needs.

3. To promote safety through prevention of accident, injury or other trauma and the spread of infection.

4. To maintain good body mechanics and prevent and correct deformity.

5. To facilitate the maintenance of oxygen supply to all body cells.

6. To facilitate the maintenance of nutrition to all body cells.

7. To facilitate the maintenance of fluid electrolyte balance.

9. To facilitate the maintenance of regulatory mechanism and function.

10. To facilitate the maintenance of sensory function.

11. To identify and accept positive and negative expressions, feelings and reactions.

12. To identify and accept interrelatedness of emotions and organic illness.

13. To facilitate the maintenance of elimination.

14. To facilitate the maintenance of verbal and non-verbal communication.

15. To promote the development of productive interpersonal relationship.

16. To facilitate progress towards the achievement of personal and spiritual goals.
17. To create and/or maintain therapeutic environment.

18. To facilitate self awareness as an individual with varying physical, emotional and developmental needs.

19. To accept the optimum possible goals in the light of limitations, physical and emotional.

20. To use community resources as an aid in resolving problems arising from illness.

21. To understand the role of social problems as influencing factors in the cause of illness.

Orem developed the self-care deficit theory of nursing which is composed of three interrelated theories.

1. The theory of self care.

2. The theory of self-care deficit.

3. The theory of nursing systems.

Self care is the performance or practice of activities that individuals initiate and perform on their own behalf to maintain life, health and well-being.

According to Betty, nursing is considered as a system because nursing practice contains elements in interaction with one another.

1. Human as adaptive system as both individual and group. 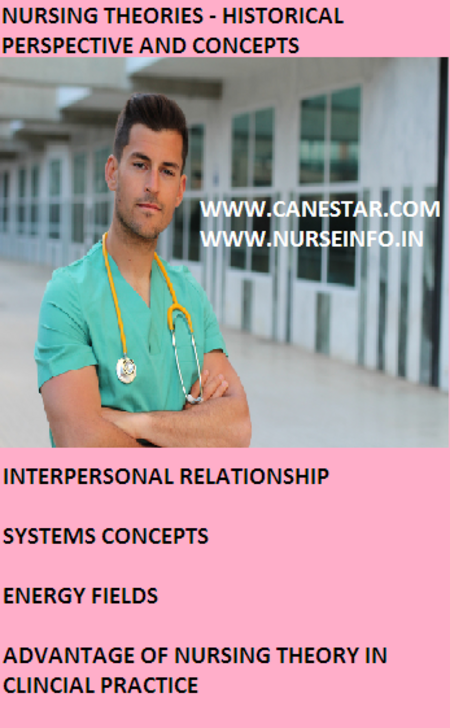