Otosclerosis or “hardening of the ear” result from the formation of an abnormal sponge-like bone growth along the stapes in the middle ear. With the new bone growth, the stapes becomes immobile prevents transmission of sound vibration into the ear, leading to conductive hearing loss. Otosclerosis usually affects both ears.

The cause of otosclerosis is not known. Hereditary (genetic) factors are probably contributary and a gene linked to otosclerosis has been identified, meaning it can be passed down through families.

Otosclerosis usually first develops between the ages of 15 and 35, but can develop in children. It is more common in women, who are affected twice as much as men. Also, a virus may play. People with otosclerosis may inherit a genetic tendency to develop the condition, but it may need a virus infection to ‘trigger’ the disease process.

Risk includes pregnancy (which may trigger onset) and a family history of hearing loss. Caucasians are more susceptible than others to otosclerosis. Pregnancy is not a cause but may make the condition worse so symptoms can often be first noticed during pregnancy.

Otosclerosis is a condition that affects the stapes, one of the tiny bony ossicles in the middle ear. To have normal hearing, the ossicles need to be able to move freely in response to sound waves. Otosclerosis causes abnormal bone material to grow in and around the stapes.

In most cases, only the stapes is affected. Sometimes the disease also affects the bony shell of the cochlea. Both ears are usually affected but sometimes only one.

Hearing loss is the most frequent symptom of otosclerosis. The loss may appear very gradually. Many people with otosclerosis first notice that they cannot hear low-pitched sounds or those they can no longer hear a whisper. Otosclerosis can lead to not only conductive hearing loss, but to nerve loss as well. Paracusis is common. This means you tend to hear better when there is a lot of background noise. For example, when people talking to someone in a pub or café that is full of other people.

In addition to hearing loss, some people with otosclerosis may experience dizziness, balance and co-ordination problems and tinnitus. Tinnitus is a sensation of ringing, roaring, or buzzing in the ears or head that accompanies many forms of hearing loss. Vertigo (dizziness and balance problems) occurs when the balance mechanism in the cochlea (the semi-circular canals) is affected.

Various tests may be conducted and these will include procedures to assess balance function as well as hearing.

Audiometric Testing: a hearing test (audiometry/audiology) may determine the extent of hearing loss.
Imaging studies: temporal-bone CT may be used to distinguish otosclerosis from other causes of hearing loss. 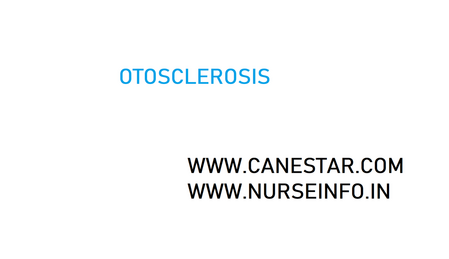