Abdominal paracentesis: it is the removal of fluids from the peritoneal cavity.

ABO Blood typing: it is a test that identifies the clients blood group (A, B, O, AB) to check compatibility of donor and recipient blood before transfusion.

Abrasion: it is wearing a way of a structure, such as the skin or teeth.

Abscess: it is the localized collection of pus and disintegrating body tissues.

Active transport: it is a movement of substances across cell membranes against the concentration gradient.

Adenosine triphosphate: it is a compound with high energy bonds that store energy for later use in performing cellular functions.

Agglutination: it is the process of clumping together.

Agglutinin: it is a specific antibody formed in the blood.

Agglutinogen: it is a substance that acts as an antigen and stimulates the production of agglutinins.

Anaesthesia: it is the loss of pain sensation; may be general, regional or local.

Angiography: it is a diagnostic procedure enabling X-ray visual examination of the vascular system after injection of radio-opaque dye. 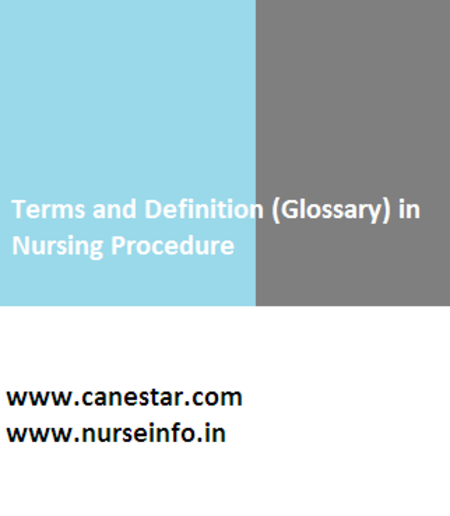 Antidiuretic hormone: it is a hormone that is stored and released by the posterior pituitary gland. It controls water reabsorption from the kidney tubules. It is otherwise known as vasopressin.

Anuria: it is the failure of the kidney to produce urine. In an adult, the output of urine may be less than 100 ml per day.

Asphyxia: it is the apparent or actual cessation of life due to interruption of effective gaseous exchange in the lungs.

Assessment: it is the process of collecting, organizing, validating and recording data about a client’s health status.

Atelectasis: it refers to the collapse of an alveolus a lobule or larger lung unit, may be caused by obstruction of a bronchus. Or pressure on the lung tissue which restrict normal lung expansion in inspiration.

Atrophy: it is the decrease in size of a tissue or organ caused by a decrease in the number of cells or deduction in the size of the individual cells.

Audit: (Nursing) it is a process in which the nursing interventions are monitored and measured against established standards.

Barium: it is a metallic element commonly used in solution as a contrast medium for X-ray filming of the gastrointestinal tract.

Basal Metabolic Rate: it is the rate of energy utilization in the body required to maintain essential activities such as breathing.

Baseline data: it refers to all information known about a client when the client first enters the health care agency.

Binder: it is type of bandage applied to large body areas (chest/abdomen) or for a specific body part (arm sling) used to provide support.

Biopsy: it is the removal and examination of tissue from the living body.

Bradycardia: it is abnormally slow pulse rate, less than 60 per minute.

Bradypnea: it is abnormally slow respiration, usually less than 10 respirations per minute.

Bronchography: it is an X-ray examination of the bronchial tree after injection of an iodized oil dye as a contrast medium.

Bronchoscopy: it is the visual examination of the bronchi using a bronchoscope.

Bronchoscope: it is a lighted instrument, used to visualize the bronchi of the lungs.

Buffer: it is an agent or system that tends to maintain constancy or that prevent changes in the chemical concentration of a substance.

Cardiac Arrest: it is a sudden cessation of heart beat resulting in the cessation of effective circulation. All heart action may stop or a synchronized muscular twitching (ventricular fibrillation) may occur.

Cardio pulmonary resuscitation: it is an artificial stimulation of the heart and lungs. It is otherwise called basic life support or it is an emergency procedure that consists of artificial respiration and external cardiac massage, instituted after cardiopulmonary arrest.

Cation: it is an ion that carries a positive charge. Sodium, potassium, calcium.

Cellulitis: it is the inflammation of the cellular tissues.

Clapping (Percussion, Cupping): it is the forceful striking of the chest with cuffed hand to loosen secretions in the lungs (used in physiotherapy).

Colonoscopy: it is the visual examination of the colon with a colonoscope.

Colonoscope: it is a lighted instrument used to visualize the interior of the colon.

Colostomy: it is an opening into the colon (large bowel).

Postural drainage: it is the drainage by gravity of secretions from various lung segments.

Proctoscopy: it is visual examination of the interior of the rectum with a lighted instrument i.e., proctoscope.

Quality assurance: it is the evaluation of the nursing services provided and the results obtained against an established standard.

Record: it is a written communication providing formal documentation of a client’s progress.

Recording (charting): it is the process of making written enteries about a client on the medical record.

Reginen: it is regulated pattern of activity.

Respiratory acidosis (hypercapnia): it is a state of excess carbon dioxide in the body.

Respiratory alkalosis: it is a state of excessive loss of carbon dioxide from the body.

Restraints: they are protective devices used to limit physical activity of the client or a part of the clients body.

Retrograde Pyelography: it is an X-ray film taken after contrast medium is injected through urethral catheters into the kidneys.

Rh Typing: it is a test determines the presence or absence of the Rh (D) antigen on the surface of red blood cells, an Rh-positive result indicates agglutinins D, C and E in erythrocytes.

Scan: it is a non-invasive type of X-ray procedure capable of distinguishing minor difference in the radio density of soft tissues.

Splint: it is a rigid bar or appliance used to stabilize or immobilize a body part.

Sutures (wound): they are the surgical stitches used to close accidental or surgical wounds, can also refer to the material used to save the wound.

Tachycardia: it is an abnormally rapid pulse rate, greater than 100 per minute.

Tachypnea: it is an abnormally fast respiration usually more than 24 respiration per minute.

Thoracentesis: it is an insertion of a needle into the pleural cavity for diagnostic or therapeutic purposes.

Thrombo-phlebitis: it is an inflammation of a vein followed by formation of blood clot.

Tomography: (CAT) it is a scanning procedure during which a narrow X-ray beam passes through the body part from different angles.

Trocar: it is sharp pointed instrument that fits inside a cannula and is used to pierce body tissues.

Trousseaus’ Sign: it is an indication of tetany, in which there is muscular spasm that results when pressure is applied to the nerves and vessels of the upper area.

Ultrasonography: it is the use of ultrasound to produce an image of an organ or tissue.

Ultrasound: it is a non-invasive diagnostic technique that uses sound waves to measure the acoustic density of tissues.

Venipuncture: it is the puncture of a vein for collection of a blood specimen or for infusion of therapeutic solutions.

Virulence: it is an ability to produce disease.

Vibration: it is a series of vigorous quivering produced by bands that are placed flat against the chest wall to loosen thick secretions.

Cyanosis: it is the bluish discoloration of the skin and mucus membranes caused by reduced oxygen in the blood.

Cystoscopy: it is the visual examination of the urinary bladder using a cystoscope.

Dehiscence: it is the partial or total rupturing of a sutured wound. Usually involves an abdominal wound in which the layers below the skin also separate.

Diffusion: it is the spontaneous movement of molecules or other particles in solution, owing to their random thermal motion, to reach a uniform concentration throughout the solvent. A process doesn’t require addition of energy to the system.

Dressing: it is a material used to cover and protect a wound.

Ecchymosis: it is a bruise that changes in color from blue black to greenish brown or yellow.

Endoscope: it is an instrument used for examination of the interior of a hollow organ (e.g. bladder, stomach).

Evaluation: it is a planned, ongoing, purposeful activity in which client and health care professionals determine the client’s progress toward goal achievement and the effectiveness of the nursing care plan.

Evisceration: it is the extrusion of the internal organs or protrusion of abdominal contents through a surgical incision.

Exudates: it is a material, such as fluid and cells that has escaped from blood vessels during the inflammatory process and is deposited in tissue or on tissue surfaces.

Gastroscopy: it is visual examination of the stomach using a lighted instrument, gastroscope.

Homeostasis: it is a tendency of the body to maintain a state of equilibrium while continually changing, a mechanism in which deviations from normal are sensed and counteracted.

Hypertonic solution: a fluid possessing a greater concentration of solutes than plasma.

Hypoxia: it is a condition of insufficient oxygen anywhere in the body.

Incision: it is cut or wound that is intentionally made. (e.g. during surgery).

Infiltration: It is the diffusion or deposition into tissue of substances that are not normal to it.

Infusion: introduction of fluid into the vein or part of the body.

In service education: it is the education that is designed to upgrade the knowledge or skills of employees.

Jaundice: it is a yellowish color of the sclera, mucous membranes and or skin.

Keloid: it is a hypertrophic scar containing an abnormal amount of collagen.

Laryngoscopy: it is visual examination of larynx using a laryngoscopy.

Leadership: it is the capacity to influence the activities of one or more individuals or groups to achieve established goals.

Law: it is set of rules and principles derived from several sources and enforceable by legal process.

Montgomery strap: it is tie tapes used to hold dressing in place.

Myelogram: it is an X-ray film of the spinal cord nerve roots, and vertebrate after injection of a contrast medium into the subarachnoid space.

Necrosis: it is death of tissue cells caused by inadequate blood supply.

Neoplasm: it is any growth that is new and abnormal.

Nosocomial: it refers to or originating in a hospital or similar institution.

Nursing process: it is a systematic rational method of planning and providing nursing care.

Ophthalmoscope: it is an instrument used to examine the interior of the eye.

Orientation: it is the awareness of time, place and person.

Orifice: it is an external opening of a body cavity.

Osmol: it is number of particles in 1 gm molecular weight of a disassociated solute.

Osmosis: it is the passage of pure solvent from a solution of lesser to one of greater solute concentration. When the two solutions are separated by a membrane which selectively prevents the passage of solute molecules but is permeable to the solvent.

Osteoporosis: it is demineralization of the bone.

Otoscope: it is an instrument used to examine the ears.

Paracentesis: it is the insertion of a needle into a cavity to remove the fluid.