The laboratory determinations may vary from hospital to hospital depending upon the techniques used. The normal values with its wide range of variation are given. Urinalysis is about examination of urine – physical, biochemical and microbiological test. We presented normal values, significance or complication and nursing implications for different urine test.

Appearance – clear without any sediment

A cloudy appearance may be due to the presence of phosphates, urates, pus, and other dissolved particles.

Strong ammoniac smell is due to decomposition of urine on standing. Fruity odor may be due to ketone bodies as seen in diabetes mellitus.

Urinary pH is usually reflective of the plasma pH with alkalinization or acidification occurring in order to maintain the body’s acid-base balance.

Get fresh urine specimens for reaction. On standing at room temperature the urine becomes alkaline due to the formation of ammonia.

Albuminuria may be found in nephritis and nephrosis, febrile conditions, poisoning, eclampsia, hypertension, and some forms of cardio-vascular diseases.

The urine contaminated with blood, pus, vaginal discharges, seminal fluid etc. may give false reports. Therefore, nurse should instruct the clients how to collect the urine specimens for laboratory tests.

Sugar in the urine (Glycosuria) is found in uncontrolled diabetes mellitus, pancreatic disorders and impaired tuber reabsorption. Glysosuria may normally result from eating a heavy meal or from emotional stress. I.V. Infusions of glucose also may rise the blood glucose level above the renal threshold.

Acetone (ketone bodies) is found in the urine when the body’s fat is metabolized for energy, producing excess metabolic end products. This occurs in uncontrolled diabetes, starvation, severe infection accompanied by vomiting and diarrhea, pregnancy and lactation.

Haematuria (RBC in the urine) often indicates pathology. It is found in glomerulonephritis, tuberculosis of the kidney, renal calculi, sickle cell anaemia, tumors of the kidney, systemic lupus erythematosus, anti-coagulation therapy, excessive use of analgesics etc.

When collecting urine from a menstruating woman, the nurse has to be careful to get the urine without contaminating it with blood.

When a client complains of haematuria, it is necessary to note whether the bleeding takes place at the beginning or at the end of each voiding.

The presence of WBC (pus cells) in the urine designates an infectious process somewhere in the urinary tract.

White cell casts are hard to distinguish from epithelial casts which denote sloughing of the renal tubular epithelium due to eclampsia, poisoning with heavy metals and acute renal allograft rejection.

Crystalluria may or may not indicate pathology. The presence of crystals in the urine is an important predisposing factor in calculus formation. Common findings are calcium oxalate, uric acid, and urate in acid urine; phosphate, amorphous phosphates and carbonates in alkaline urine.

Since the urine is normally sterile, bacteriuria represents infection within the urinary tract.

Some special tests are carried out in order to isolate micro-organism for the diagnosis of diseases involving the urinary tract, some of them are:

AFB – for the diagnosis of tuberculosis of the kidney

Gram’s stain – for the diagnosis of gonorrhea

Culture – for the diagnosis of urinary tract infection

Animal inoculation – for the diagnosis of Weil’s diseases etc 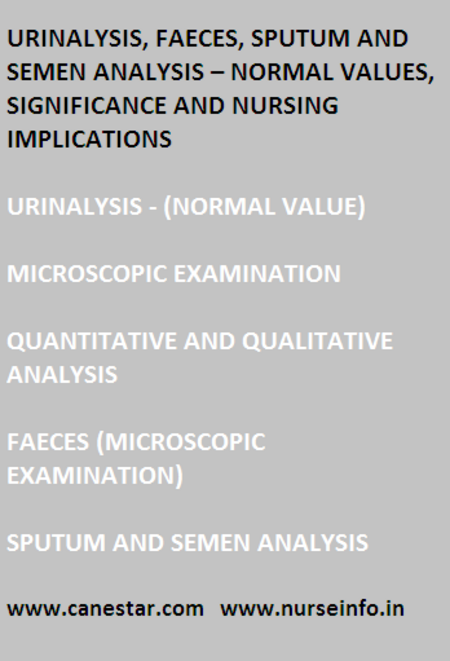 QUANTITATIVE AND QUALITATIVE ANALYSIS OF URINE

Calcium excretions are increased in hyperparathyroidism, Vit. D. intoxication etc. it is reduced in hypoparathyroidism and Vit. D. deficiency.

Positive results are seen in pregnancy, chorionepithelioma and hydatidiform mole.

Increased levels are seen in typhoid fever, salmonella infections and tetanus. It is decreased in muscular atrophy, anaemia, leukaemia and advanced degeneration of kidneys.

Positive results are seen in acute porphyria and liver diseases.

Increased in gout and reduced in nephritis

Melaena (tarry black stools) indicate bleeding into upper G.I. tract, the blood being altered by the gastro-intestinal juices or it may result from the administration of iron

Clay colored stools indicate obstruction to the flow of bile into the intestinal canal.

Presence of blood in large amounts is suggestive of bleeding piles, destruction of a blood vessel in the large intestines by an ulceration process or contamination of the stool with menstrual blood.

Blood and mucus are found in amoebic dysentery.

Pus cells are seen in bacillary dysentery. E.H. cyst is found in amoebic dysentery. E.coli are non pathogenic and is commonly found in colon. Presence of ova indicates presence of roundworm, pinworm or whipworm. The ova of each worm have its own characteristics. Segments to tapeworm are seen in tapeworm infestation.

Vibrio cholerae is seen by its motility in cases of cholera infection.

The stools should be freshly collected. It should be examined without any delay.

Amount – normally no sputum is expectorated.

Polymorphonuclear cells are found in large numbers along with lymphocytes, in cases of lung diseases and tuberculosis.

Eosinophils are seen in conditions of asthma, allergic conditions etc.

A.F.B. will be positive in cases of tuberculosis of the lungs.

Aspermia (absence of ejaculate) is seen with incompetent bladder neck following surgery of the neck of the bladder. It may also indicate a hypoandrogenic state.

Azoospermia (absence of sperm in the semen) is associated with primary testicular disorders of complete obstruction of the seminal tract.

Oligospermia (lowered sperm density) is often associated with decreased spermatogenesis. A sperm density of less than 20 million/ml is considered as infertile